Written By Jamie I.F.
Founder of increasing.com, and here to give you the info you need to either start your making money online journey, grow and improve your niche sites, and build the most meaningful and fulfilling life for you. 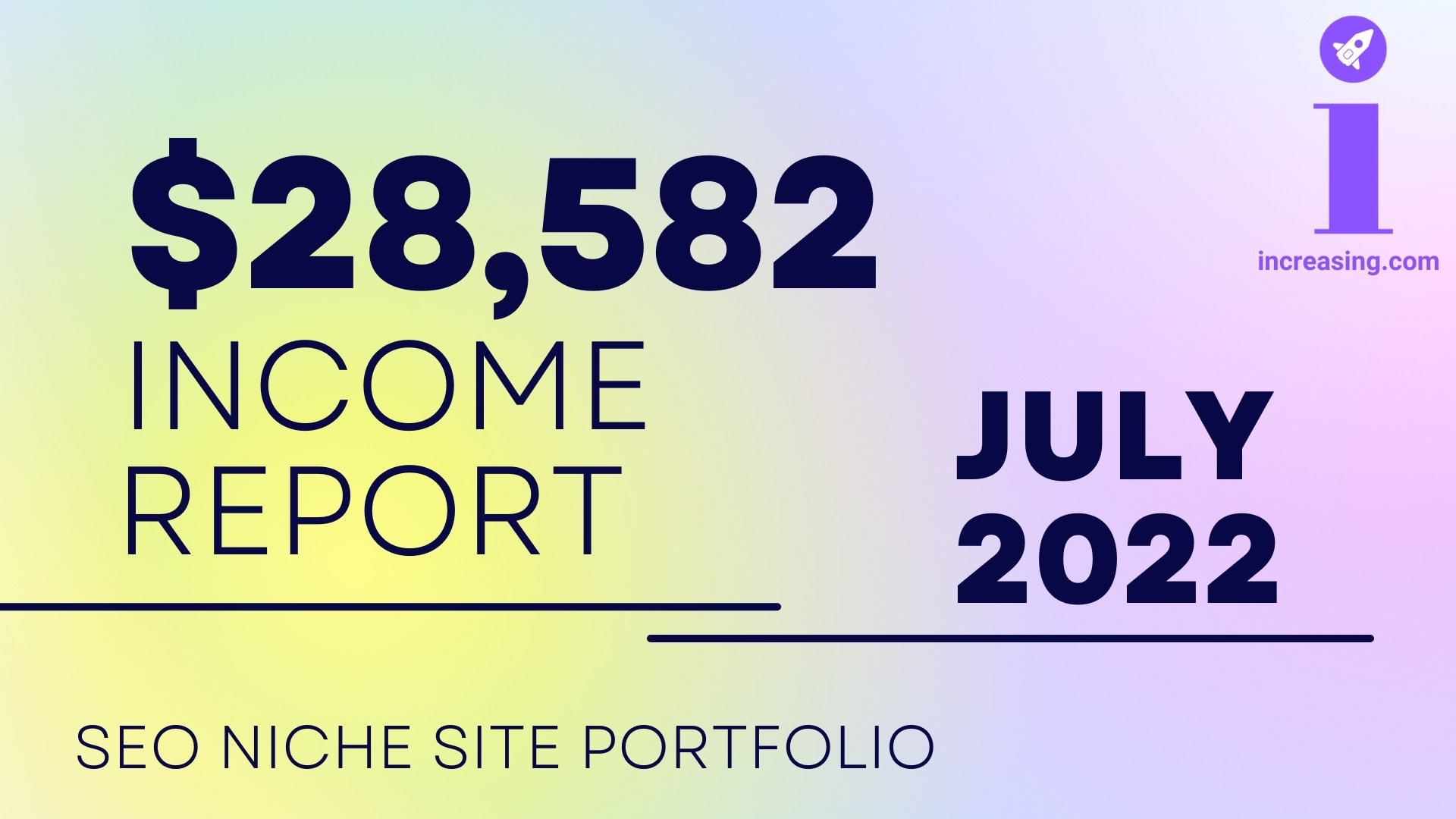 This in itself is boosted by the raised Amazon Affiliate commissions during the majority of July. So, all things considered, our natural minimum level of earnings is probably around $25,000 per month – which unless we can keep driving increases, is probably what we’ll earn in August 2022.

We have goals to hit just under $40,000 in revenue in September 2022, so we need to really work hard to drive increases in revenue over these next couple of months.

The total breakdown for the earnings was:

In last month’s income report, we said that in July we would target:

Here’s how we fared:

We made $5,684 less this month than last month – but this was expected. We earned $9K from an affiliate program that is extremely volatile and seasonal, so earning $20,000 is still good for this site.

The full breakdown is:

Other key metrics are:

Unfortunately, RPMs dropped off a cliff right at the end of the month, so we earned less despite getting more page views. This has continued into the start of August, which is very frustrating, but our ad network have assured us that they are trying to fix the issue that caused this.

Our plan for this month is to improve our email collection on this site for better monetisation here (currently non-existent), as well as the site’s social media presence as we build the site to become more of a brand, and less of just a niche site.

There’s also a lot of keyword research and keyword validation to prep for the second half of the year’s publishing schedule — with more of a focus on info content rather than just affiliate. Some diversification is necessary, and you don’t need the same careful level of oversight here.

We’ve just onboarded two writers for the site, so they’ll practice on lower competition info content and go from there.

We’re testing more real product reviews than ever – and seem to be unaffected (or even experiencing a small gain) from the Product Review update. We’ll keep doing this, and making sure we’re as safe as possible, as well as building a moat between us and our competition.

Our second site had its best ever month last month!

However, it did benefit from the raised Amazon Affiliate commissions, so unfortunately we can’t say that it’s all completely natural. In fact, if you take the raised commissions away, it was basically exactly the same – around $5,500.

However, for a site build on a fresh domain registered in November 2020, with only around 120 posts – and it has never had a huge amount of focus on it – I’m hugely proud of the site’s performance.

The earnings break down to:

We didn’t do much publishing, just 8 articles. But, we do have around 18 drafts that just need formatting, and we’ve recently hired an excellent writer who will add to those numbers.

We really want to be publishing 20 posts per month here, ideally even slightly more. Hopefully we reach that soon.

We’ve also joined a couple new affiliate programs that we’ll be pushing this month, and optimizing some of our high-performing content.

While our non-Amazon-boosted earnings are probably around $5500/month, we’ll aim for $6000-$6500 by re-optimizing and publishing new content in August.

Our goal for this site is £6,500 revenue by the end of September, so we need to push this site by another 20%-ish. Probably 10% can come from eking out more conversions and traffic from already successful content, but we’ll need to be seriously publishing also to hit that milestone. RPMs will also be up slightly.

**Early August update: the site appears to have benefited from the Product Review Update, and is currently up around 15%. Hopefully, this transfers directly into higher revenues.

Site 3 is one where we have a full-time staff member working on the site, producing around 20 pieces of high-quality content every month.

The site earned $831 in July, up around $50 from last month, but has steadily increased over the latter half of the month, and we are aiming to earn $2,000 this month – but this number includes hypothetical ad revenue that we do not yet receive, as we are waiting until we hit 30,000 page views to put the site on AdThrive.

With our estimated ad revenue, this site would have earned $1,125 this month, so we’re aiming to increase this by around $875 in August – but we have a plan to do this. Then, the goal for September is £3,000 – which will be much harder, but we’re determined.

The goal for the end of September is also 30,000 page views so that we can monetise the site with ads and earn real money instead of this hypothetical money lol.

The earnings break down to:

We’re going to be doing a fair bit of optimizing on this site in August, going back through and improving some already high-performing articles that rank in the top 5, and trying to hit that number 1 spot, as well as converting better. We are getting traffic to commercial articles, but not converting it too well, so a major part of this month’s profitability depends on substituting in better-paying and better-converting affiliate programs.

We also have 19,800 words on our WordAgents account laying around, so we’re using all of those on this site for supporting content.

But there’s a proper plan in place based on what we’ve already proven to work now, so we’re confident this one is going to really grow in the future.

This is a much newer site, started in April 2021 but without much attention ever being devoted to it.

It had been hovering around the $100 monthly earning mark for a while, but the combination of rate increases, and growing after the May 2022 Core Update, meant that it grew from $70 last month to $300 this month!

Unfortunately, the Product Review Update of July seems to have smited it back down again. But, we’ll monitor and work out our strategy once things have had time to settle.

We’re considering putting ads on this site, seeing as we don’t see it going supernova and rocketing to 30,000 page views any time soon. If we do, we’ll put it on Ezoic, and earn a couple hundred dollars for the ~10,000 monthly page views probably. So the site could probably earn $500 per month.

Haven’t done anything with this site in over a year, it continues to decline, and we don’t have any immediate plans to rescue it.

Our time is simply spent better elsewhere, so RIP to site 5.

This site was one we purchased for $5500 a few months back, and we’ve basically done nothing with it except map out the new architecture and strategy for the site – but haven’t applied it yet.

However, in July the site performed far above expectation. It has no ads on it currently, but was converting so well into affiliate sales that despite the low traffic it still earned a solid amount.

We have re-hired a writer who used to work for us to write for this site, and will look to publish 10+ high-quality pieces of affiliate content and informative content.

This was another site we purchased in the same deal for $5500, and I had high hopes and even spent a couple days writing articles for this site a few months back.

It hasn’t taken off, and I think we’re going to have to redirect it to a new more general domain, as it’s very commercial-focused and not very brandable — think “bestproductforXYZ.com”.

This isn’t a huge priority for us as we just have so much other work to do, but eventually we’ll sort moving this one to a new domain, redo-ing the site design to complement the move, and work on running this site up.

We’ve even got like 10 articles we commissioned on WordAgents like 5 months ago sitting around unpublished. We need to get back on it and get publishing.

July was fine – we performed probably as expected, with a nice boost from higher Amazon earnings.

However, we’ll see what the rest of the July Product Review has to say: early signs show a small gain on our main site, and +10-15% on both sites 2 and 3 – however, site 4 has been negatively hit.

We’re focusing most heavily this month on: 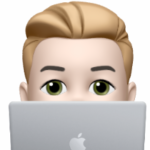 Jamie I.F.
Founder of increasing.com, and here to give you the info you need to either start your making money online journey, grow and improve your niche sites, and build the most meaningful and fulfilling life for you.